Looking good is one of the many things that we humans are concerned about. After all, our appearance serves as our social asset.

When it comes to looks, we spend a great deal of time having our hair styled. We are so particular about it that we even stick to just one hairstylist or barber.

However, there are some cases where you will have to pick a new hairstylist. If you happen to pick the wrong one, you may leave the salon feeling frustrated because the stylist has not achieved the style that you want.

We want the same thing for our dogs. We want them to look good and be attractive. But we also make the same mistakes when it comes to choosing a groomer. And when you do, your dog will end up looking like Hanna’s husky whose groomer took shaving quite literally.

Hannah realized that her dog was due for a haircut. And what she wanted to happen was for her dog to be shaved just enough to keep it from shedding too much. So she took her dog to a new groomer.

However, the dog ended up looking funny. The dog’s entire body was shaved while leaving the fur in its head intact. Somehow, the dog looked like an awkward lion.

Hannah shared the picture of his dog online. As expected, it went viral. Some people thought that it was funny, but some voiced out their concerns.

One user said that a husky’s insulation might be compromised when the double coat was shaved down. Some seemed to blame the dog groomer.

But the post eventually took a different turn. People whose dogs had the same case shared some pictures.

One user shared a photo of his dog whose fur was shaved entirely while leaving the head just fine. Another user’s dog, while suffering the same fate, seemed to be fine with it. 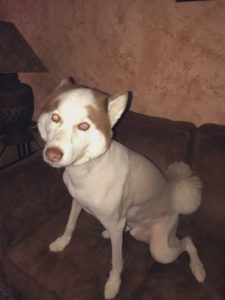 Thank you to our friends at Irish Independent for sharing the original story.

The attitude of a child is mainly caused by how …

Separation anxiety is one of the common behavior problems that …

We invite you to smile, laugh and cry daily as we search the internet for the best Dog stories and videos.

Our website is made possible by displaying online advertisements to our visitors. Please consider supporting us by disabling your ad blocker.